Which Foods Are High in Vitamin B? A Dietician's Vegan Recommendations 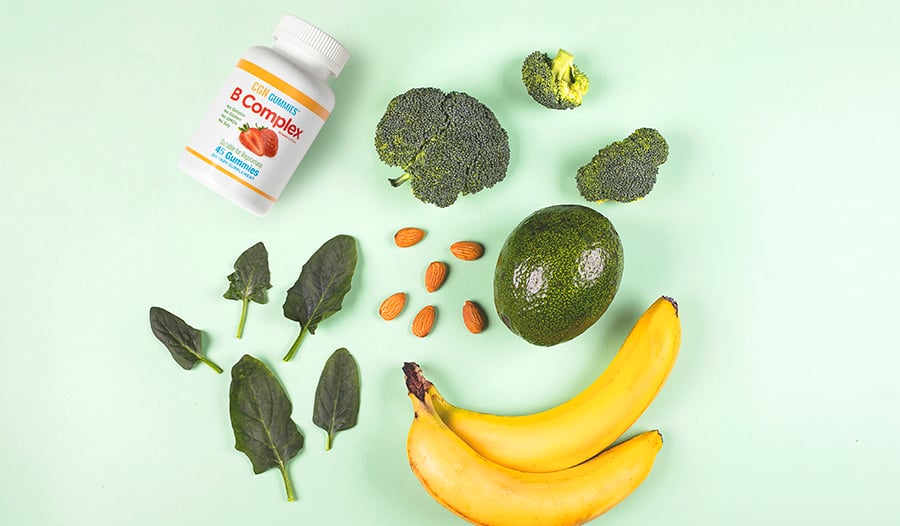 You have probably heard of some popular B vitamins, but did you know there are a total of eight types of them? B vitamins are water-soluble, meaning they dissolve in water and are not stored in the body, but instead are carried to the body's tissues. These vitamins play roles in many organs and systems in the body. They help with metabolism by converting food into energy, creating new blood cells, and maintaining healthy skin cells, brain cells, and other body tissues.

Although they can work together in the body, typically in the form of a vitamin B complex, they also carry out their own functions. B vitamins can be found in both plant and animal foods, but this article will show you how to find vitamin B in plant-based sources.

Continue reading to learn what each individual vitamin does in the body and what foods are the best sources for each specific B vitamin. According to the Food and Drug Administration (FDA), these are the recommended daily values for each.

*An RDA (Recommended Dietary Allowance) does not exist for biotin because there is not enough evidence to suggest a daily amount needed by most healthy people. Instead, there is an AI (Adequate Intake) level, which is assumed to ensure nutritional adequacy.

Thiamin was the first B vitamin discovered by scientists, hence its name B1. Thiamin is needed for a healthy nervous system, heart, and brain function. It also helps the body turn food into energy. Luckily, thiamin deficiency is rare in first world countries, but can pose an issue for certain disease states such as alcoholism, Crohn’s disease, and anorexia.

Food sources of thiamin include:

Thiamin is sensitive to high heat and long cooking times; it may also be lost if soaked in water. During food processing, it may be removed. This is why thiamin is enriched in many whole grains that have undergone processing.

Small amounts of riboflavin can be produced by gut bacteria, but not in quantities that meet the dietary recommendations. Riboflavin is important for growth of cells, energy production, and the breakdown of fats, steroids, and medications. A riboflavin deficiency is very rare in the United States, but deficiencies mostly commonly occur with other nutrient deficiencies. Vegans can be at higher risk for deficiency if they aren’t eating green vegetables or nuts. Riboflavin is found mostly in fortified foods but also in some nuts and green vegetables.

Plant-based food sources of riboflavin (vitamin B2) include:

Riboflavin is sensitive to light and shouldn’t be exposed to too much of it. The sensitivity to light is why milk cartons have been changed to a more opaque material so the product inside doesn’t absorb as much light.

There are two main forms of niacin: nicotinic acid and niacinamide or nicotinamide. Both forms are found in foods as well as supplements. The body can convert the amino acid tryptophan to nicotinamide. Niacin (vitamin B3) has been shown to help reduce LDL cholesterol, increase HDL cholesterol, and provide overall heart health benefits. There is very low concern in consuming niacin in the amounts found in food, but supplementation may cause various effects. You should always check with your physician before starting or changing your supplements.

Plant-based food sources of niacin (vitamin B3) include:

Pantothenic acid is needed to create proteins and fats. It is also involved in the making of cholesterol, amino acids, and fatty acids as well as helping with other metabolic functions. Pantothenic acid can be made in small amounts by bacteria in the gut, but not in quantities that meet dietary needs. Almost all plant- and animal-based foods contain pantothenic acid in varying amounts. Deficiency is rare in the United States but may affect people with severe malnutrition.

Plant-based food sources of pantothenic acid (vitamin B5) include:

The body is unable to produce vitamin B6 on its own, so it must come from foods or supplements. Vitamin B6 is needed for the metabolism of protein, fat, and carbohydrates in the body. It also helps in the making of red blood cells. Because it plays a role in making red blood cells, vitamin B6 may be beneficial in preventing and treating anemia. There is limited research on using B6 to treat anemia, but the results so far have been promising.

Plant-based food sources of vitamin B6 (pyridoxine) include:

Vitamin B7, more popularly known as biotin, has been largely associated with hair, skin, and nail growth. Although a deficiency in biotin can lead to hair loss, skin, and or nail problems, the National Institutes of Health reports that there is insufficient data to support these claims. Biotin does help with the breakdown of fats, carbohydrates, and proteins in food. A biotin deficiency in the United States is rare but certain disease states such as alcoholism can increase the risk of biotin deficiency.

Plant-based food sources of biotin (vitamin B7) include:

Cooking can cause biotin to become ineffective, so eating raw or less-processed versions of biotin-containing foods is recommended.

Folate is the natural form of vitamin B9. Folic acid is the synthetic form of folate and is found in fortified food and supplements. Folic acid is better absorbed than that from food sources, nearly 85% vs 50%. Folate helps to form DNA and help make red blood cells. It is very important in times of rapid growth during pregnancy and fetal development. It is recommended that women of childbearing age that wish to have children take a folic acid supplement as well as eating a variety of foods that contain folate. The FDA requires that manufacturers add folic acid to enriched grain products.

Plant-based food sources of natural folate (vitamin B9) include:

Although folate is called B9, don’t be confused: there are only eight total B vitamins.

B12 is found in animal products, but can also be found in some fortified foods and supplements. Vitamin B12 is needed to form red blood cells and DNA. It also plays an important role in the nervous system. When B12 is eaten in food form and begins digestion, once it reaches the stomach many reactions occur allowing B12 to be absorbed in the small intestine. People who do not eat animal products like meat, dairy, and eggs may need vitamin B12 supplements.

Plant-based food sources of B12 (cobalamin) include:

Most multivitamins have some of each of the B vitamins, sometimes even reaching 100% of the daily needs of some of them. B vitamins are important for everyday bodily functions. Each vitamin has its own important role in the body, but when taken together as a B-complex they have improved absorption and result in the best health benefits. Some studies have shown that taking a B-complex vitamin supplement may be the best choice. Always consult with your primary care healthcare provider before adding supplementation to your diet.

Which Foods Are High In Vitamin D?

Are you getting enough vitamin D? A doctor shares food sources of D vitamins, and explains why you need them in your diet.

Which Foods Are High in Vitamin A?

Vitamin A is a fat-soluble vitamin needed for vision, immune function, reproduction, bone health, and more. Find out which food sources are rich in this nutrient and how they can benefit health.

5 Nutrients Missing from the American Diet According to A Dietician

A registered dietitian walks us through common nutrient deficiencies in the standard American diet and how to easily get more of them.