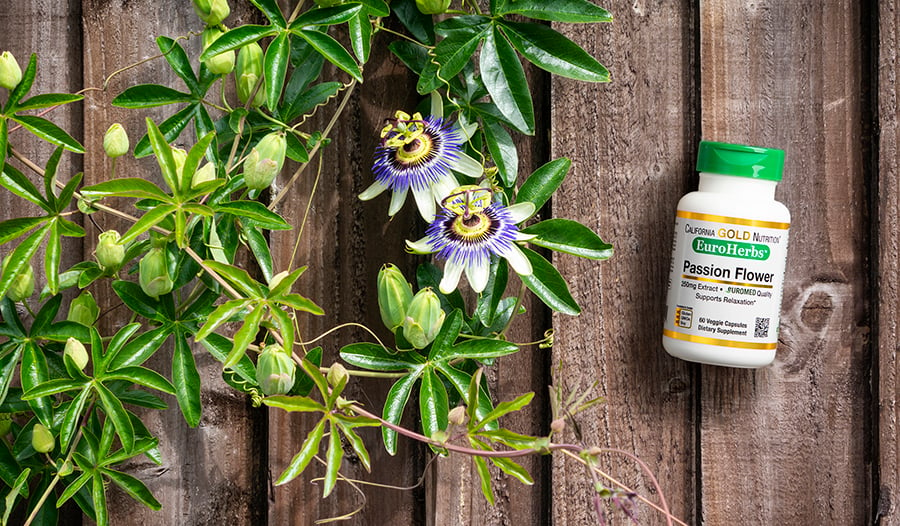 Passionflower is a popular natural remedy known for its calming and relaxing properties used around the world.

Native to the Americas, specifically tropical southeastern North America, passionflower belongs to the Passiflora family of plants. It grows as a climbing vine in Europe, Asia, and many other places across the globe.

Named Passion by Roman Catholic Priests in the late 1500s, passionflower resembled the crucifix of Christ, whose last earthly days get described as The Passion.

With more than 500 species of passionflower, Passiflora incarnata is the most commonly used species in dietary supplements and natural health remedies.

Many cultures around the world have used Passiflora as a folk remedy. Herbalists in South America knew it commonly, and a Spanish doctor named Monardes discovered it in 1569. In 1633, Jesuit Ferrari published a book titled De Florum Cultura, where he described Passiflora and its various parts as a symbolic representation of the Passion of Christ. He listed the following depictions: three-lobed leaves as the spear, the ovaries as the chalice, and the five stamens as the five wounds.

The Jesuits gave the Latin name for passionflower: Passio, meaning suffering, flos meaning the flower, and incarnata translating to ‘to make flesh,’ or reincarnation. Thus, the name Passiflora incarnata came to be.

Passionflower has gotten used in American homeopathy as a nerve sedative in World War I, Brazilian folk medicine, and Native American remedy for boils and wounds. In Europe, it has traditionally treated restlessness.

Passiflora has a strong history of good medicinal value in both the past and the present. Empirical evidence supports its use as medicine, as does a variety of clinical research studies.

Passionflower has many medicinal benefits that may improve your life. Anxiety and insomnia affect millions of people worldwide. Passiflora could be just the remedy to combat these problems and others naturally.

Another study found that passionflower was effective for treating patients diagnosed with generalized anxiety disorder (GAD). This study compared the effects of Passiflora to a common pharmaceutical drug used to treat GAD, oxazepam. They concluded that both Passiflora incarnata and oxazepam treated GAD effectively, and no significant difference in the two protocols existed. However, there were substantially more problems related to the impairment of job performance in the oxazepam group.

While traditional medicine has used Passiflora to treat anxiety for many moons, modern-day scientific research is co-signing the legitimacy of this known anxiolytic botanical remedy.

Additional research conducted on rats to test the effects of Passiflora incarnata on sleep found that it significantly increased total sleep time. The researchers then concluded that passionflower extracts are appropriate sleep inducers.

Passionflower has sleep-inducing effects due to its ability to increase gamma-aminobutyric acid (GABA) in the brain. GABA may help improve sleep quality because it lowers brain activity.

A psychiatric research center conducted a small study on children with attention-deficit hyperactivity disorder (ADHD). They administered passionflower tablets to the children for eight weeks. The results suggest that they could be a novel therapeutic agent for the treatment of ADHD. The tolerable side effect profile was considered another benefit of Passiflora in the study.

Considering Passiflora’s ability to calm, it doesn’t take a great leap to understand how it can benefit a hyperactive child or adult with ADHD. Passionflower’s sedating effects would naturally quell hyperactivity and ease symptoms associated with ADHD.

While Passiflora incarnata is relaxing and sedating, two additional strains in the Passiflora family have demonstrated stomach-soothing properties.

So far, the gut health benefits have only been demonstrated in rats as no human studies have gotten published to date. Still, the research shows promising benefits for digestive health.

Anticonvulsant effects were observed in mice treated with a chemical to induce seizures in a clinical trial. More research needs to be performed to support these findings, but it is a promising indicator that Passiflora could be a potential treatment option for seizure patients.

How to Take Passionflower

Passionflower can be taken in liquid tincture form. A tincture is an herbal extract typically in an alcohol base. Many companies make glycerin-based tinctures for those who want to avoid any alcohol consumption.

Passionflower tea is another popular way to enjoy the calming benefits of Passiflora. A warm cup of tea before bed can be soothing while promoting better sleep.

Finally, capsules are a convenient way to enjoy passionflower and are easy for traveling.

As always, talk to your doctor before taking passionflower or any new herbal supplement.

Passionflower Risks and Side Effects

Although considered generally safe, passionflower exhibits side effects of dizziness, confusion, and drowsiness.

Due to these potential side effects, it should not get taken before driving or operating heavy machinery. Avoid taking passionflower with other sedatives. Because it may induce uterine contractions, do not take if pregnant or breastfeeding.

Previous Article
3 Reasons Why You May Have Seen Eucalyptus Plants Hanging in the Shower
Next Article
Upset Stomach? 4 Ways Ginger May Help

Have You Heard Of Beta-carotene? Here Are The Top 5 Benefits

Discover the health benefits of beta-carotene and how it can improve your lung, skin, immune, eye, and mental health status.

Have You Heard of Fisetin? This Antioxidant May Have Brain and Memory Benefits

Fisetin is a flavonoid found in fruits and vegetables. Studies have shown that it may have beneficial effects on brain health and memory.