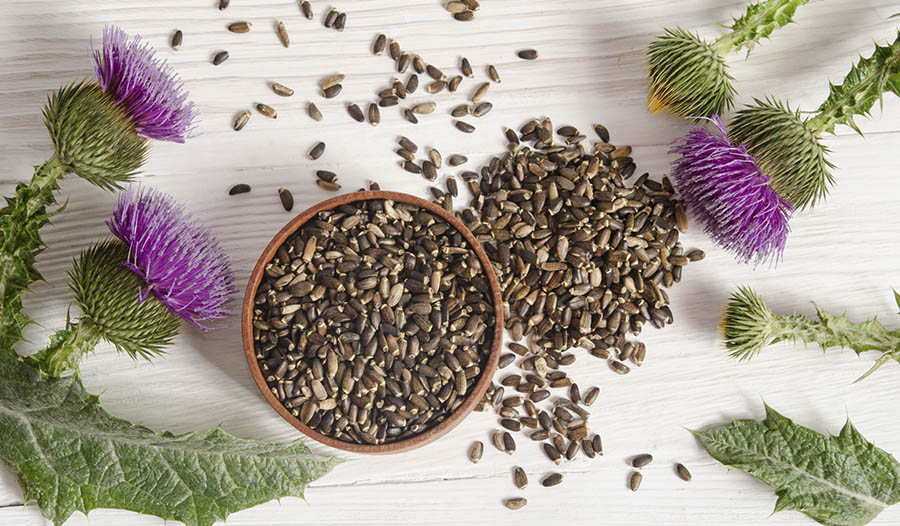 The human liver is an incredibly complex and hardworking organ. It performs many vital functions, but the two that receive the most attention are its roles in detoxification processes and the metabolism of carbohydrates, fats, and protein. To function correctly, it is important to protect the liver from the constant bombardment of toxic chemicals produced internally and from food, water, and the environment.

What Is Milk Thistle Good For?

Many plants exert beneficial effects on liver function. However, the most impressive research has been done on milk thistle extracts (Silybum marianum). Much of the health benefits of milk thistle extracts are due to the concentration of silymarin, a complex of flavonoid compounds that significantly protect the liver from damage and enhance detoxification processes. Silymarin components are among the most potent liver-protecting substances known.

Milk thistle extracts (usually standardized to contain 70% silymarin) have shown various beneficial effects in human clinical trials, many of which are related to improving liver function. When liver function improves, it allows this organ to do its job. As a result, improvements are noted in blood sugar control, cholesterol and fat metabolism, and general health.

One of the key manners in which milk thistle extract enhances detoxification reactions is by preventing the depletion of glutathione. The level of this valuable detoxification aid, antioxidant, and cellular protector within the liver is critically linked to its ability to protect itself and detoxify harmful compounds. Essentially, the higher the glutathione content, the greater the liver's capacity to detoxify harmful chemicals.

Typically, when exposed to chemicals that can damage the liver, including alcohol, the glutathione concentration in the liver is substantially reduced. This reduction in glutathione makes the liver cell susceptible to damage.

What Does the Research Say About Milk Thistle Extract?

In numerous clinical studies, silymarin has been shown to have positive effects in supporting liver health regardless of the stress or challenge to this organ. The benefits are typically confirmed by clinical and laboratory data. For example, one early study highlighted the benefit of silymarin in individuals exposed to toxic chemicals. In this study, abnormal results of liver function tests (elevated levels of liver enzymes in the blood [AST and ALT activity]) and/or abnormal platelet or white blood cell counts were observed in 49 of 200 workers exposed to toxic toluene and/or xylene vapors for 5 to 20 years. Thirty affected workers were treated with silymarin, and the remaining 19 were left without treatment. Taking milk thistle extract improved liver function parameters and platelet and white blood cell counts.

Milk thistle extract is also helpful in the fatty liver associated with obesity, diabetes, and metabolic syndrome (abdominal obesity, elevated blood lipids, insulin resistance, etc.). In studies of subjects with these disorders, milk thistle extract led to significant improvements in liver function and, as a result, blood sugar and cholesterol metabolism. Milk thistle extract also improved some antioxidant indices (SOD, GPX, and TAC) and decreased a marker of inflammation (C-reactive protein). Athletes have also been shown to respond to milk thistle extract's ability to boost antioxidant markers in the blood.

Phosphatidylcholine, the key component of lecithin, is not merely an emulsifier or carrier of the silybin. It has also been shown to promote liver health by helping to repair cell membranes. Hence, these two components of Siliphos® work synergistically to protect and repair liver cells. Scientific research indicates that Siliphos® is better able to accomplish this goal than regular milk thistle extracts because it is better absorbed and has the added benefit of phosphatidylcholine.

The absorption advantage of Siliphos® has been shown in several human and animal studies when it has been compared to an equal amount of silybin in regular milk thistle extracts. In one study, the excretion of silybin in the bile was evaluated in patients undergoing gallbladder removal because of gallstones. A special drainage tube, the T-tube, was used to get the necessary bile samples. Patients were given either a single oral dose of Siliphos® or silymarin from milk thistle extract. The amount of silybin recovered in the bile within 48 hours was 11% for the Siliphos® group and 3% for the silymarin group.

One of this study's significant features is that silybin has been shown to improve the solubility of bile. Since more silybin is being delivered to the liver and gallbladder when the phosphatidylcholine-bound silybin is used, this form is the ideal form to support liver health in individuals with poor bile solubility seen in such conditions as gallstones or fatty infiltration of the liver, two conditions characterized by decreased bile solubility.

Another study designed to assess the absorption of Siliphos® plasma silybin levels was determined after the administration of single oral doses of Siliphos® and a similar amount of silybin from milk thistle extract to 9 healthy volunteers. The authors concluded Siliphos® was absorbed roughly seven times greater than regular milk thistle extracts standardized to contain silymarin (70-80%).

Several human clinical studies have also shown Siliphos® to produce better results than regular silymarin extracts in supporting improved liver function. For example, in a study designed primarily to evaluate the dose-response relationship of Siliphos®, positive effects were again displayed at a level better than those reported for milk thistle extracts containing 70-80% silymarin.

In the study, patients with chronic poor liver function were given different doses of Siliphos®: 20 patients received 80 mg twice daily, 20 pts received 120 mg twice daily, and 20 patients received 120 mg three times daily for two weeks. At all tested doses, Siliphos® produced a remarkable and statistically significant decrease in laboratory measurements indicating liver function, such as the levels of bilirubin and liver enzymes (e.g., ALT, GGTP, etc.). These results indicate that even short-term use of Siliphos® can improve liver health.

Milk Thistle and Side Effects

Milk thistle extracts have been extensively studied and show no toxic effects in animal or human studies. Because silymarin increases bile flow, humans may produce a looser stool.

In conclusion, plants have many ways of helping us with our health. From reducing inflammation to improving liver function, many species lend a hand in keeping us feeling our best. Milk thistle extracts are particularly notable due to their high concentration of silymarin, and research has shown multiple beneficial effects when taken by humans. Of course, always consult your physician before beginning any new health regimens and ask your doctor to assess if milk thistle extract might be an appropriate choice for you. If they agree that taking it can improve your well-being, then nothing should stand in the way of you harnessing the incredible power of nature!

Mushroom extract AHCC can improve immune health and may support our stress response, liver health, and ability to fight chronic disease. Here's what a naturopathic doctor has to say about AHCC.

Many of us are familiar with olive oil and its benefits but have little to no awareness of the powerful benefits of olive leaf extract (OLE). Also referred to as oleuropein, the name of its main component, Olive Leaf Extract is derived from the leaves of the plant that bears olives, a tree called Olea Europaea. It is believed by many to help prevent cardiovascular disease, diabetes, cancer, and other conditions.