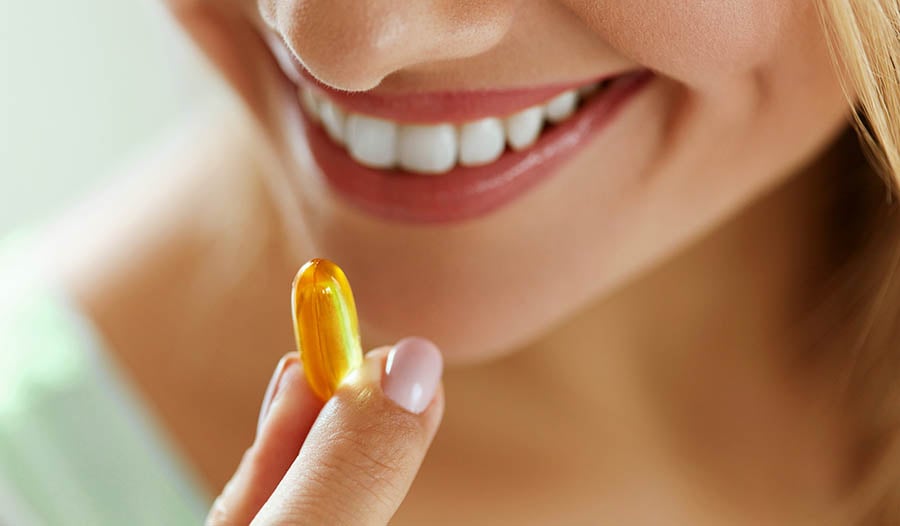 Omega-3 fatty acids, also known as polyunsaturated fatty acids or PUFAs, play an important role in human health. They are believed to have numerous benefits for the heart, brain, gut, and joints,  thanks to resolvins, active metabolites that, according to studies, help reduce inflammation.

A 2014 study showed that the majority of U.S. adults do not meet the weekly recommendations for omega-3 fatty acid consumption — 90 percent of Americans do not meet the American Heart Association recommendation of two 3.5-ounce servings of low-mercury fish per week. This shortcoming is not unique to North America but also throughout Europe, the Middle East and parts of Asia. This is unfortunate as there are many common conditions can benefit from sufficient intake.

Attention Deficit Hyperactivity Disorder or ADHD is a common condition faced by people of all ages. For children in traditional school settings, ADHD can be quite debilitating and negatively affect self-confidence. Millions of adults are also suffering from this condition, which can cause problems at work and in personal relationships. Prescription medications can be quite helpful, but they are not without side effects. A 2016 study demonstrated that omega-3 fatty acids could be beneficial in treating those with ADHD symptoms. Other studies have also shown benefit.

Anxiety disorder affects millions worldwide. Prescription medications are frequently prescribed, and some can be habit forming. Many seek other alternatives. A 2018 meta-analysis in JAMA which included 2240 participants from 11 countries, concluded the omega-3 fatty acids could help reduce symptoms of clinical anxiety. Other studies have found similar findings.

As one ages, osteoarthritis can affect joints, usually causing morning stiffness and difficulty moving. For many, the pain may improve with movement, but reducing inflammation in the body is crucial. Omega-3 fish oil (EPA/DHA) can be helpful. I frequently recommend omega-3 fish oils to patients with arthritis symptoms and have seen good results. This frequently allows patients to reduce reliance on non-steroidal inflammatory drugs (NSAIDs: ibuprofen, naproxen, diclofenac), which can increase the risk for heart and kidney complications.

Asthma is a reversible inflammatory lung disease that occurs when the muscles surrounding the lung tissues constrict. Worldwide, 300 million people are affected while almost 250,000 people die from complications of the condition annually. Asthma can cause symptoms like wheezing, coughing, and shortness of breath.

Scientists have measured increase inflammatory proteins (IL-17A and TNF- α) in the blood of those with asthma. Researchers noted a decrease in these levels in children with mild-to-moderate asthma while taking 180mg EPA/ 120mg DHA daily for three months. Additionally, clinical pulmonary function testing improved in 72 percent of patients.

A 2017 study suggested that fish oil supplementation by pregnant women could help reduce asthma symptoms in their children after birth (consult with your physician if pregnant). A 2018 study in Pediatric Allergy and Immunology concluded that the “introduction of fish early in life (6-9 months) and regular consumption of all fish (at least once a week) reduces asthma and wheeze in children up to four and a half years old while fatty fish intake may be beneficial in older children.”

Lastly, a 2016 study in Nutrition Research Reviews concluded that supplementing with omega-3 fish oil could benefit asthma sufferers, while another 2016 study in Cytokine concluded that omega-3 is a promising complementary approach to managing asthma.  Learn more about natural approaches to asthma.

Depression is a common ailment that affects millions. The causes are many. Prescription medications can be helpful, but it frequently takes trials of various formulations before a person finds what works best. Many seek alternative approaches, and optimizing one’s essential fatty acids is one approach taken.

A 2001 study showed EPA (essential fatty acids) could help with severe depression. A 2015 study in Integrative Medicine Research supports the use of omega-3 fish oil in the treatment of depression, while a 2017 study of 38 children with depression and anxiety demonstrated that those with mostly depression symptoms improved when given omega-3 fatty acids. Their anxiety symptoms did not significantly improve in this study.

A 2017 study of adults found that there was not sufficient evidence on omega-3 fatty acids to prove they can be adequately beneficial in those with depression. There was no evidence of harm. More studies are needed to further evaluate.

A healthy gut is important for overall health. The gut-brain axis is known to play a significant role in cognitive and overall physical health. Omega-3 fatty acids play an important role in helping to balance out the gut microbiome and appear to have a prebiotic effect, according to a 2017 study in the International Journal of Molecular Sciences. A 2016 animal study also showed that omega-3 fatty acids can protect the gut against antibiotic-induced changes that can lead to an imbalance of healthy gut bacteria.

A 2013 study in the Annals of Internal Medicine studied 2,692 U.S. adult males aged 69 to 79 years without a history of heart disease, stroke, or congestive heart failure. The men had their blood fatty acid levels measured in 1992. They were followed through 2008. The researchers showed that those with higher levels of EPA and DHA were 17 percent and 23 percent less likely to die. They concluded that higher levels of total 3-PUFA levels were associated with lower risk of death from vascular disease.

High triglycerides are a known risk factor for heart disease. Therefore, lowering these levels is crucial. In addition to consuming essential fatty acids, diet is important in helping to lower them. Pharmaceutical drug companies have realized the benefit of lowering triglycerides and have developed a pharmaceutical-grade fish oil, which is FDA approved. However, due to its high cost, many are unable to afford it. Over-the-counter fish oil capsules are a great alternative.

Migraines are debilitating headaches that can be life-altering. They are also a leading cause for work absences. Prevention is key. A 2017 study showed that omega-3 fatty acids could be helpful in the treatment of those with migraine headaches, possibly by reducing inflammation in the brain. Learn more about natural approaches to migraine headaches.

Psoriasis is a chronic inflammatory skin condition that generally presents with raised dry patches of skin. It can be very difficult for those who are affected. Prescription medications can be helpful, but can sometimes have serious side effects. As a result, natural treatments are frequently sought. In addition to avoidance of foods that may trigger a flare-up, such as dairy or wheat, omega-3 fatty acids have become a popular option for many.

A 2018 study in Scientific Reports showed that Resolvin E1, an omega-3 metabolite, could explain the mechanism by which omega-3 fatty acids could help those with psoriasis.

A 2015 study in the Journal of the American Academy of Dermatology reviewed 15 studies and found 12 studies showed omega-3 fatty acids were beneficial, while three trials showed no benefit.

Based on the research, it seems prudent for those with psoriasis to try omega-3 treatment. Some have noted additional improvement when taken in addition to vitamin D. Recommended omega-3 fatty acid doses range from 2,000 mg per day up to 10,000 mg per day of an EPA/DHA combination.

Rheumatoid arthritis is an auto-immune condition in which the immune system attacks the joints, specifically the cartilage and even the bone, resulting in severe and frequently debilitating arthritis pain. While up to one in three who take prescription medications may notice improvement, many are concerned about long-term side effects and seek a more natural approach to reduce symptoms. Omega-3 fatty acids may be one such therapy.

A 2010 study demonstrated the effectiveness of omega-3 fish oils in helping to reduce pain and joint swelling in those with rheumatoid arthritis. A 2016 study in the Global Journal of Health Science evaluated 60 patients taking DMARDs (disease-modifying anti-rheumatic drugs) for their rheumatoid arthritis. When compared to a placebo pill, those taking omega-3 fatty acids noted a significant improvement in their symptoms, increased mobility, and less pain.  A 2015 study in Annals of Rheumatic Diseases also showed that those who were undergoing conventional treatment for their rheumatoid arthritis did better when fish oil was added to their regimen.

A 2019 study did not show any evidence of that high intake of fish or fish oil prevented the onset of rheumatoid arthritis. At this point, it appears its main benefit is in the treatment once already diagnosed.

Traumatic brain injury (TBI) has become more understood over the last decade. This has been brought to light by professional football players and the complications they have had due to multiple concussions. Soldiers have also been affected by TBI due to exposure to blast injuries.

Scientists have realized that inflammation occurs when a brain is traumatized. This results in oxidative damage and an increase in excitatory amino acids. A 2012 study in the American Journal of Emergency Medicine suggested that early administration of omega-3 fatty acids could help reduce some of the inflammation that occurs, leading to better outcomes.

A 2016 study in the Journal of The American College of Nutrition discussed omega-3 fatty acids overall safety profile and suggested they be considered first-line treatment for traumatic brain injury. This can be considered for athletes, soldiers, or those in accidents.

Side Effects or Bleeding Risk?

Doctors commonly recommend patients stop their fish oil prior to surgery. According to a 2017 study which looked at 52 other studies, this is not necessary as there is no increased bleeding risk during or after surgery that can be attributed to fish oil supplements. Despite this, following your doctor’s recommendations is still encouraged.

Some may also notice indigestion from fish oil supplements. If so, then a different brand can be considered.

Most take between 500 mg up to 4,000 mg per day of fish oil. If taking the higher dose, consuming half in the morning and half in the evening should be considered. There are also vegan options of EPA/DHA available. Fish oil is available in liquid form, capsules and even gummy formulations.

Why Omega-3 Fatty Acids Are So Important

Top 10 Sources of Omega-3: Which Is Right for You?

Omega fatty acids come from many different sources and have numerous health benefits. Learn about 10 sources of omega-3s from fish oil to algal oil.

Krill is a small, red, lobster-like creature found in the Atlantic Ocean. Krill oil is an essential fatty acid that is extracted from the crustacean. It contains the same omega-3 fatty acids as omega-3 fish oil and, for that reason, is chosen by many as an alternative. The fatty acids included in krill are docosahexaenoic acid (DHA) and eicosapentaenoic acid (EPA).