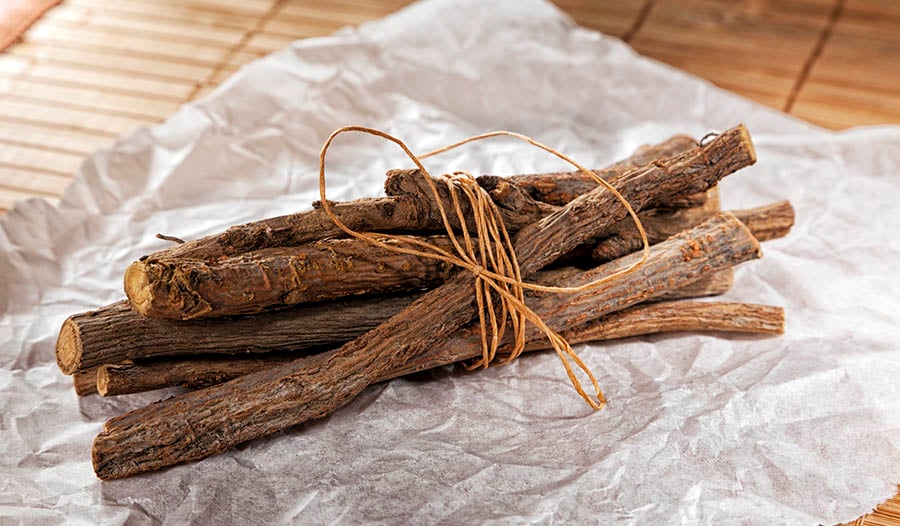 A special extract of licorice known as DGL is a remarkable medicine for peptic ulcers.* The term peptic ulcer refers to ulcers that occur in the stomach (gastric ulcer) or the first portion of the small intestine (duodenal ulcer). Duodenal ulcers are more common with an estimated frequency rate of 6 to 12% of the adult population in the United States. In other words, approximately 10% of the U.S. population has clinical evidence of duodenal ulcer at some time in their lifetime. Duodenal ulcers are 4 times more common in men than in women and 4 to 5 times more common than gastric ulcers.

What are the symptoms of an ulcer?

Although symptoms of a peptic ulcer may be absent or quite vague, most peptic ulcers are associated with abdominal discomfort noted 45-60 minutes after meals or during the night. In the typical case, the pain is described as gnawing, burning, cramp-like, or aching, or as “heartburn.” Eating or using antacids usually results in great relief.

What causes an ulcer?

Even though duodenal and gastric ulcers occur at different locations, they appear to be the result of similar mechanisms. Specifically, the development of a duodenal or gastric ulcer is a result of some factor damaging the protective factors which line the stomach and duodenum. In the past, the focus has primarily been on the acidic secretions of the stomach as the primary cause of both gastric and duodenal ulcers. However, more recently the focus has been on the bacteria Helicobacter pylori and non-steroidal anti-inflammatory drugs (NSAIDs) like aspirin and ibuprofen.

Gastric acid is extremely corrosive. The pH of gastric acid (1 to 3) would eat an ulcer right through the skin. To protect against ulcers, the lining of the stomach and small intestine has a layer of mucin. In addition, the constant renewing of intestinal cells and the secretion of factors which neutralize the acid when it comes in contact with the stomach and intestinal linings also protect against ulcer formation. The acid is designed to digest the food we eat, not the stomach or small intestine.

Contrary to popular opinion, over-secretion of gastric acid output is rarely a factor in gastric ulcers. In fact, patients with gastric ulcers tend to secrete normal or even reduced levels of gastric acid. In duodenal ulcer patients, almost half have increased gastric acid output. This increase may be due to an increased number of acid producing cells known as parietal cells. As a group, patients with duodenal ulcers have twice as many parietal cells in their stomach compared to people without ulcers.

Even with an increase in gastric acid output, under normal circumstances, there are enough protective factors to prevent either gastric or duodenal ulcer formation. However, when the integrity of these protective factors is impaired, an ulcer can form. A loss of integrity can be a result of H. pylori, aspirin and other non-steroidal anti-inflammatory drugs (NSAIDs), smoking, alcohol, nutrient deficiency, stress, and many other factors.1-5

What is the best natural medicine for ulcers?

A special extract of licorice known as DGL.* Licorice has historically been regarded as an excellent medicine for peptic ulcer. However, due to the side effects of the licorice compound glycyrrhetinic acid (it causes elevations in blood pressure in some cases), a procedure was developed to remove this compound from licorice and form deglycyrrhizinated licorice (DGL). The result is a very successful anti-ulcer agent without any known side effects.*6-11

How does DGL work?

The proposed mechanism of DGL is that it stimulates and/or accelerates the protective factors which protect against ulcer formation.* This mechanism of action is much different than antacids and drugs like Tagamet, Zantac, Pepcid, Prevacid, and Prilosec which work by neutralizing or suppressing gastric acid. An obvious question related to DGL is “Does DGL have any effect on Heliobacter pylori?” The answer appears to be yes as DGL is composed of several flavonoids which have been shown to
inhibit H. pylori.12*

How does DGL compare to antacids or drugs like Tagamet and Zantac?

Numerous studies over the years have found DGL to be an effective anti-ulcer compound.* In several head to head comparison studies, DGL has been shown to be more effective than either Tagamet, Zantac, or antacids in both short term treatment and maintenance therapy of peptic ulcers.7,8* However, while these drugs are associated with significant side effects, DGL is extremely safe and is only a fraction of the cost.

What has the research shown with DGL in gastric ulcers?

Very good results. For example, in a study of DGL in gastric ulcer, 33 gastric ulcer patients were treated with either DGL (760 mg, three times a day) or a placebo for one month.9 There was a significantly greater reduction in ulcer size in the DGL group (78%), than in the placebo group (34%). Complete healing occurred in 44% of those receiving DGL, but in only 6% of the placebo group.*

Subsequent studies have shown DGL to be as effective as Tagamet and Zantac for both short term treatment and maintenance therapy of gastric ulcer.* For example, in a head to head comparison with Tagamet, one hundred patients received either DGL (760 mg, 3 times a day between meals) or Tagamet (200 mg, 3 times a day and 400 mg at bedtime).7 The percentage of ulcers healed after 6 and 12 weeks were similar in both groups. Yet, while Tagamet is associated with some toxicity, DGL is extremely safe to use.

Gastric ulcers are often a result of the use of alcohol, aspirin or other nonsteroidal anti-inflammatory drugs, caffeine, and other factors that decrease the integrity of the gastric lining. As DGL has been shown to reduce the gastric bleeding caused by aspirin, DGL is strongly indicated for the prevention of gastric ulcers in patients requiring long-term treatment with ulcer-causing drugs, such as aspirin, other NSAIDs, and corticosteroids.10

What about DGL in duodenal ulcers?

DGL is also effective in duodenal ulcers. This is perhaps best illustrated by one study in patients with severe duodenal ulcers. In the study, forty patients with chronic duodenal ulcers of 4 to 12 years duration and more than 6 relapses during the previous year were treated with DGL.11 All of the patients had been referred for surgery because of relentless pain, sometimes with frequent vomiting, despite treatment with bed rest, antacids, and powerful drugs. Half of the patients received 3 grams of DGL daily for 8 weeks; the other half received 4.5 grams per day for 16 weeks. All 40 patients showed substantial improvement, usually within 5 to 7 days, and none required surgery during the one-year follow-up. Although both dosages were effective, the higher dose was significantly more effective than the lower dose.

In another more recent study, the therapeutic effect of DGL was compared to that of antacids, or cimetidine in 874 patients with confirmed chronic duodenal ulcers.8 Ninety-one percent of all ulcers healed within 12 weeks; there was no significant difference in healing rate in the groups. However, there were fewer relapses in the DGL group (8.2%) than in those receiving cimetidine (12.9%), or antacids (16.4%). These results, coupled with DGL protective effects, suggest that DGL is a superior treatment of duodenal ulcers.*

How do I take DGL?

The standard dosage for DGL in acute cases is two to four 400 mg.* chewable tablets between or 20 minutes before meals. For milder chronic cases or for maintenance the dosage is one to two tablets 20 minutes before meals. Taking DGL after meals is associated with poor results. DGL therapy should be continued for at least 8 to 16 weeks after there is a full therapeutic response.

It appears that in order to be effective in healing peptic ulcers, DGL must mix with saliva. DGL may promote the release of salivary compounds which stimulate the growth and regeneration of stomach and intestinal cells. DGL in capsule form has not been shown to be effective.

Antacids seem to help my symptoms, should I continue to use them or will they interfere with the effectiveness of DGL?

Antacids can be used as part of the initial treatment for symptomatic relief. All antacids are relatively safe when used on an occasional basis, but I strongly recommend avoiding antacids which contain aluminum. I recommend following label instructions and avoiding the regular use or overuse of antacids. Taken regularly antacids they can lead to malabsorption of nutrients, bowel irregularities, kidney stones, and other side effects.

Ulcerative colitis is an autoimmune condition and may be triggered by bacteria, viruses, and certain foods. A doctor discusses natural ways to manage common symptoms.

What is SIBO? And What can Help Support Gut Health?

Small intestinal bacterial overgrowth (SIBO) may seem like a new condition, but I first wrote about it over 35 years ago. At the time, in the early 1980s, there was a lot of focus on the overgrowth of Candida albicans in the intestinal tract as a factor in a complex set of symptoms. Yet, I noticed that many of the patients I was seeing had these symptoms, but no evidence of candida being out of control. Something else had to be responsible for their symptoms and an overgrowth of bacteria in the small intestine seemed like a very good explanation. In the last 10 years or so, SIBO has become a big buzzword in research and on the internet. Fortunately, there are effective answers.